Fruitful Achievements of the Taiwan Studies Program at Washington University in St. Louis 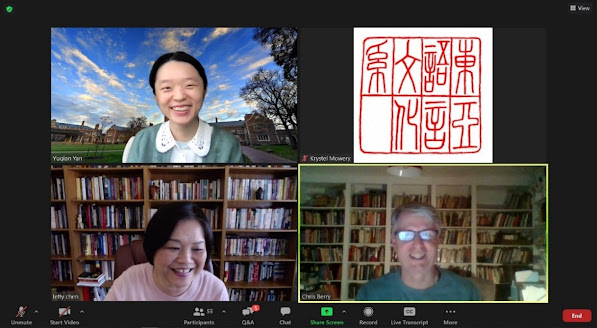 The COVID-19 pandemic has hit the United States hard and dampened or halted a wide range of academic activities across the US, but the Taiwan Studies Program at Washington University in St. Louis has continued to offer a Taiwanese culture related presence. The program has offered three Taiwan Studies courses and several Taiwan-centered events virtually, attracting hundreds of attendees nationwide.

The first colloquium of the Taiwan Studies Pr
ogram in 2021—on Taiwanese Puppetry Cosplay: Negotiating Performance and Animation—was held on February 4. Dr. Teri Silvio, a Research Fellow at the Institute of Ethnology at Academia Sinica in Taiwan, gave a presentation on digitalized swordplay puppetry and its cosplay culture. (Cosplay is dressing up like a fictional character)

A unique intersection between the Taiwanese glove puppetry tradition and the influence of Japanese anime culture, swordplay puppetry videos (pili budaixi) has attracted a huge number of young people both in Taiwan and abroad. Enthusiastic fans are keen collectors of the puppet toys and endeavor to bring the characters to life through cosplay. Drawing from her extensive ethnographic research, Dr. Silvio theorized on cosplay culture from a Taiwan perspective, examining how local female cosplayers negotiate between play, social expectations, emotional projections, and affective labor.

The East Asian Languages and Cultures Department at the university organized a film festival that showcased two films from 1960s Taiwan. “The Best Secret Agent” —made in 1964—was the first Taiwanese-language spy movie, and “Six Suspects” —made in 1965—tells the story of a private detective solving the case of the murder of his ex-lover. These films demonstrate clear foreign influences but they also highlight local experiences in Taiwan against the backdrop of the Cold War.

More than a thousand Taiwanese-language films were made between the 1950s and 1970s, but only about 200 have survived. It was only recently that these films have been archived, restored, and made available to English-speaking audiences. The East Asian Languages and Cultures Department has been working with the UK-based Taiwanese-language Film Festival to bring these long forgotten films to scholars, students, and the general public.

The films attracted over 300 viewers, taking them on a journey back to 1960s Taiwan incorporating passion and mystery. The film festival concluded with a webinar talk by Prof. Chris Berry from Kings College London, one of the founders of the “Taiwan’s Lost Commercial Cinema: Recovered and Restored” project. He talked about the history and development of Taiwanese-language films and led a discussion on the two films with 77 enthusiastic participants.

This has been another successful year for the Taiwan Studies Program at Washington University in St. Louis, launched there in July 2009. The program focuses on Taiwanese cinema, visual culture, and performance art. After over a decade of hard work and dedication, the Taiwan Studies Program has become well-established at the university, and it also offers the local community a window into vibrant Taiwanese culture.