Three students accepted into a Master’s program in Taiwan! 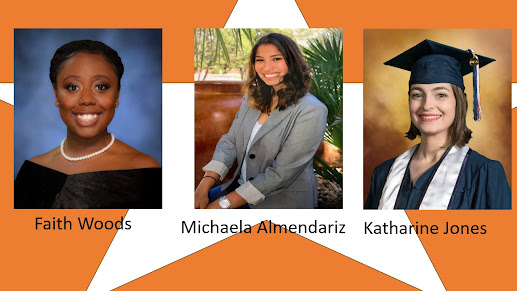 Students got accepted into Graduate Program:

Originally from Taiwan, Dr. Ward is very familiar with some Taiwanese universities. Thus, she contacted several department chairs in graduate programs of universities in Taiwan to provide the opportunities for her students to continue their higher education overseas. Then she helped the students apply for their graduate schools through advising, guidance, and editing their application documents. Meanwhile, she continuously confirmed and followed up with the department chairs in Taiwanese universities.

“I helped students apply to three national universities, and they already received the admission certificates from the first graduate school they applied. This university (NCCU) is one of the top universities in Taiwan, and NCCU’s graduate program in political majors is the top one in Taiwan”, said Dr. Ward.

My name is Faith Woods and I graduated cum laude from UTSA in Fall 2020. I earned my bachelor's degree in Political Science with a double minor in Global Affairs and Chinese. For two years, I have been a student of Dr. Ward from Elementary level to Advanced level Chinese courses. In the summer of 2019, I was able to travel with Dr. Ward to Taiwan where I studied Chinese language and culture while also having unique opportunities such as guest starring on radio stations and participating in ancient Chinese festivals. After graduation, I am thankful to say that with Dr. Ward’s support, I have applied and been accepted to attend graduate school at a top Taiwanese university. I am very excited to further my education in Taiwan while also strengthening the Chinese language and culture knowledge I have acquired at UTSA.

Michaela Almendariz: graduated in May, 2019

My name is Michaela Almendariz. I graduated in spring of 2019 with a Bachelor's in International Business. During my studies I was able to learn Mandarin, from beginners to advance level, with Dr. Ward. I was even able to visit China with UTSA a couple times to expand my knowledge on the culture. During my travels abroad, I decided I wanted to pursue a higher education overseas. Dr. Ward was able to provide great guidance in researching the different universities in Taiwan for me to apply to. I am blessed to say that I have officially been accepted into a Master's program at National Chengchi University in Taipei, Taiwan. It is one of the top recognized universities in the country. I am ecstatic on my next adventure in a new country and looking forward to what lies ahead.

My name is Kathatine Jones, although entering UTSA back in fall 2016 I didn't settle on my Global Affairs major until Spring 2019. It was also the semester I joined the UTSA Chinese

Language and Culture Club. The leading factor for why I joined the club and later on deciding to pursue further studies in Taiwan was the rich culture and history of Asia, more specifically the China and Taiwan's political culture and history.

In all honesty the idea of applying to graduate school was daunting, but I got told by friends in the club to talk to Dr. Ward. The entire process went smoothly with the guidance and instruction from Dr. Ward, she made it feel more achievable than I thought it was going to be. I can't thank her enough for the mentorship and help she provided. My acceptance to NCCU, which is the top political science university Taiwan, was made possible by Dr. Ward.